We are a contemporary Druidic order based in Liverpool affiliated to the Council Of British Druid Orders (COBDO). Our membership comprises many people from many walks of life and on a wide variety of spiritual paths. We embrace many spiritual paths including Pagan, Rosicrucian, Golden Dawn, Wiccan, Spiritualism and Kimetic; we gather together under the symbol of the phoenix embracing a vision of humanity appreciating its true spiritual nature and nurturing that spiritual spark in all sentient life. The phoenix symbolizes the individual rising from the ashes of ignorance into the light of spiritual truth and appreciating the spiritual side of our nature and nurturing it to achieve fulfillment and happiness in an overly materialistic world.

HISTORY
The lineage of the Phoenix Order Of Druids (POD) comes from the history of two orders, King Arthur's "Loyal Arthurian Warband" and Dylan Ap Thuins and his "Insular Order Of Druids" who unfortunately didn't get to see his dream fulfilled as he passed over to the summerlands.

King Arthur and arch-druid Debbie King (IOD) laid the foundation stones to POD in Portsmouth in 2005. Both King Arthur and Debbie King contacted arch-druid Wayne to run POD at the same time Wayne set up the "Grove Of The Round Table" and held its first ritual at Samhain 2005. We were honoured and stand proud to have been made members of the Council Of British Druid Orders (COBDO) in March 2007. POD are proud of our beloved heritage and are one of the druid orders named in for the Loyal Arthurian Warband.

The Phoenix Order Of Druids is a family based order that hold rituals for all the equinoxes and sabbats and we have in our short time performed handfastings, naming rites and burial and cremation rites. The arch-druid of POD is Wayne and druid-priestess is Kate.

We are a teaching and learning order that hold monthly moots by invitation only and we follow many spiritual paths and come together to worship the god / goddess and worship in our own sacred way as the individual heart dictates. POD is the parent order of the "Grove Of The Round Table" and the "Order Of The Blue Lotus", POD are also the only recognised pagan chaplaincy service for most of the hospitals within Liverpool and the surrounding area. We are also very active on the internet. 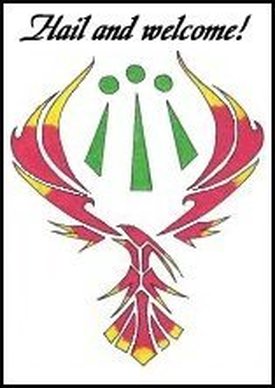